YES, it is possible to improve property ALREADY OWNED by a 1031 Exchange! An improvement exchange just means we are going to buy something and build on it… Hear it all from the best 1031 Exchange facilitator in the business, David Moore.

Can I improve on property already owned by a 1031 Exchange?

So, an Improvement Exchange just means we are going to buy something, and build things. Escrow holdbacks do not work. You can’t say, “Gee, I’m buying this property for a million bucks, it needs 100K in work. We’re going to have $100,000 left as an escrow holdback, so if I do the work later, I never touch the money.”

That doesn’t work. It needs to be complete at the time of transfer. So, if we need to do an Improvement Exchange, we’re going to either build that purchase (that $100,000) in the purchase price, and get the seller to do the work. Or if they don’t want to do that, or you don’t want them to do that, then you’ve got a choice…

If you’re pulling 100, then you’re going to pay tax on 100. Or we do an improvement exchange, which means we’re going to create that eve once again, the exchange combination title holder, the LLC that it will take ownership, do the improvements, and then convey the improved property back to the taxpayer. We’re going to describe the property and the improvements to the best of our ability.

You’re going to build a 3,000 square foot single family rental with X dollars, and that’s what you’re putting on there. Does the project have to be done to satisfy your exchange? No, only what is done, only what constitutes real property the 180th day, is going to qualify. In a market like we’re in, you’re saying, “Gee, I’ve got a property that I no longer want. I’ve got a property over here I would like to build on. Can I take proceeds from this sale over here to improve this property over here?”

If you ask most people they’re going to tell you, “No, you can’t do that.” So, we look at the laws and we say, “Okay. When I look at an exchange, what were my four cornerstones?” One, it’s got to be an exchange. Two, it’s going to have to be of like-kind, any real property held for investments, like-kind or with any real property, you’re tenthold for investment. Three is a napkin test value and equity across rough. And four, we have to have the tax barrier that relinquishes receipts.

So if we look at taking property, it comes into us, you gave it to us, and we sold it. We now have money there, and we know we’ve got 45, 180 days to get you new property of equal or greater value back. You say, “I’ve got this dirt over here I wanna build on.” Now, the nice thing about that is, if you bought a piece of property in Multnomah county today, how long would it take you to be able to build anything on it? A few years?

If you bought a piece of property today, how long would it take you to be able to build anything on it?

I don’t know if anyone in here is young enough. Maybe CC is. Anyway, the deal is that it takes time. If you own the property already, you can be prepping and planning, getting all the permitting, everything in place, and as soon as the property sells, boom! We hit the ground running. And I grew up in Santa Cruz, California, so anytime the surf was up, the contractors would disappear. What happens here? We’ve got snow, we’ve got hunting season, things like that happen. But, let’s say we’ve got time. You know that it’s harder to build through the winter than the summer, and so you’re timing the transaction, and you time your sale to fit.

Anybody familiar with The Stafford Hills Swim and Racquet Club? The owner/developer of that project came to us in the recession and said, “Hey, I want to exchange out of some apartments I’ve got, and into this project.” I said, “Well, you know, that’s great. But I don’t think you’re going to get your building sold.” Because nothing was selling, right? Nothing could be moved.

Then what did we do? I said go ahead and buy the dirt, get everything planned out, get it permitted. Get it all figured out. Then when you’re building sells, we’ll start this exchange process. So, by doing that, the underlying dirt was already owned. And the dirt no longer counts as an up leg for that property that’s going away. So when when it did sell, this apartment complex, it came in and they had done everything including the grating. Planning, permitting, all the engineering. Everything was set to go, and it was grated. So when that building sold, they hit the ground running and we just went through it and moved it right away. It was a giant erector set, so we burned a pile of money very, very quickly in that scenario.

Did the project get completed within 180 days? No! But it didn’t have to. All that had to be completed in that scenario was like 8 or 10 million dollars worth of improvements. That’s what needed to get done. 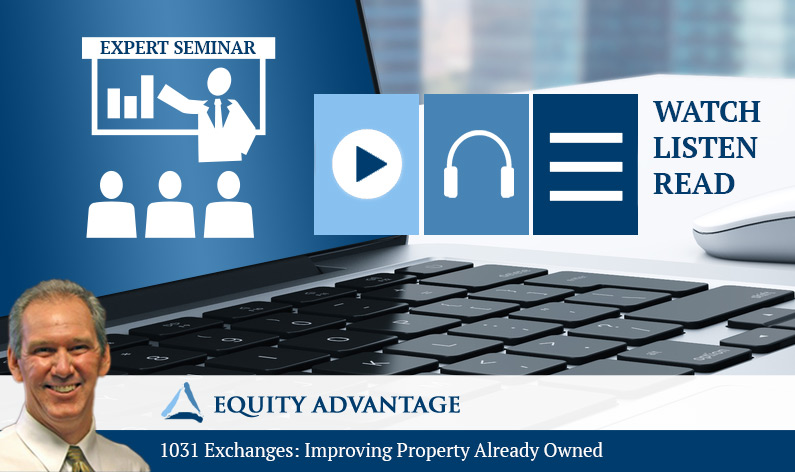 What constitutes a test for improvement? Is it a pile of receipts? Is it into appraising?

Well I have the receipts, and I have pictures taken. I have completion certificates, and occupancy permits if they were in place. You’re going to want to document what’s there. So the underlying dirt did not count. Just what constituted real property come the 180th day, that’s what qualified towards the exchange. We couldn’t get to day 175 and say, “Gee, I’ve got a half million dollars sitting here, I’m going to go pre-pay a labor and material,” and have that work. That would not qualify. Only what is real property at that time of transfer.

So you’re going to document it however you can. When we’re done with a transaction like that, basically we’re going to have a whole ledger because we’re talking about an improvement exchange. Once again, we create the entity… and in this scenario, pre-2000, we got guidelines in 2000 for reverse exchanges. And one of those safe harbors prohibited your receipt of property already owned as a replacement for property being relinquished.

Prior to that, what would happen is the property being improved would be deeded over to us, then the property goes away, we take the money due to the improvements, and deed the improved property back to the taxpayer, completing the transaction. We read that Prop 2000 dash 37 prohibited that, so we went around and around and Ron said, “Hey. How about this? How about we’ll use this leasehold interest.”

So if anyone ever questions it, you say, “Okay, what’s the definition of real property? What’s like-kind? What did they receive?” And by law, at every level you can check that box. With that said, do I want you to run out and do these transactions without talking to your tax and legal people? Absolutely not.
Because what we’re going to do is send you the information, we’re going to send you a step-by-step of how to do it, we’re going to send you the case law talking about it, both good and bad, and you’re going to talk to your tax and legal people about it. And, the idea is, we want your tax people to be happy with it. Because the idea is if you’re ever audited… you want to be doing things proactively, rather than reactively. You want your tax people to know, this is what we did and why we did it.

Maybe you want to do an attached dwelling unit on the back, we’ve done those. We had a renewal lease on a portion of that property. So, it doesn’t have to be all new stuff. It can just be capital improvements to an existing thing, but only that new real property, the new stuff that’s of like kind is going to qualify.