by David Moore | Exchange of the Month | 0 comments 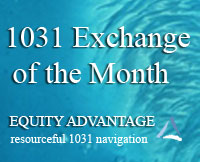 When talking about 1031 exchanges it is common to assume the conversation is regarding real estate, in reality virtually anything that can generate a capital gain can be exchanged… This month’s exchange is an aircraft exchange.

Our client has been a successful real estate investor for many years and was therefore aware of the 1031 exchange process. The success he had realized enabled him the luxury of private jet ownership. It was time he upgraded the jet and he realized through depreciation a sale of his old plane would trigger a tax. He had a buyer for his relinquished aircraft and had already targeted a new one.

We were contacted regarding the possibility of a 1031 exchange and confirmed the deal was a good one. The exchange was documented and the aircraft was sold. Within a week the new aircraft was acquired through the exchange and our exchangor was airborne in his new plane having deferred all his tax. Find out more on personal property 1031s.