When Should Cost Segregation Be Done?

David Moore with Equity Advantage asks the expert Jonathan Frizzell with CBRE about when a cost segregation should be performed. They also look at the impact of tax reform and the ballpark cost of a cost segregation study. Get advice from the experts so you can make wise decisions about your investment properties.

When Should Cost Segregation Be Done?

David Moore: We’re trying to demystify cost segregation for people, because it’s complicated and sometimes I think it’s often lost on people that are just looking at like a rental house. This is a real opportunity that’s just missed and we need to be aware of these things. I always recommend using a team of professionals, because it’s complicated. I’ve been in this business a long time, 30 years, and I still find some of the stuff you do to be like black magic, honestly. You probably look at what I do and feel the same thing. But I think it sort of really pinpoints the fact that it is complicated. You need to have somebody who is competent and knows what they’re doing to care of it for you, and it needs to be supported with other people. You have a team of people that are going to support these things. If there’s ever a question on something, you want definitely the person’s tax people involved, right? Why don’t you explain a little bit about who you’re typically corresponding with when you put one of these studies together. Obviously, the property, the principles, but then what other people would you consider to be team members?

David Moore: When we talk about exchanges, everybody wants to put it in the tax or legal world. I say it’s not a tax or legal decision. It’s purely an investment decision. I would look at what you do in the same way. I mean, you don’t do an exchange. You shouldn’t be doing it just to hide from tax. You’re punting it down the road and deferring things, and it works no differently than an IRA or 401k plan really. A lot of times people come in to me and say, “Well, why would I do an exchange? I’m going to have to pay the taxes at some point anyway why not pay it today?” And I say, “Well, do you have an IRA?” Of course they do, and so the question is: “Why? You’re going have to pay the tax at some point anyway. Why not pay it today?” What you deal with day-in-day-out is really creating a value, creating a value for the building, creating a return, a better return, for people.

Jonathan Frizzell: It’s the time value of money. We don’t teach enough of it in our schools, public or private. But the dollar is always going to be worth more today than tomorrow, and that’s the time value of money. And would you rather have the dollar today or do you want to wait 39 years or 27 1/2 years to get that depreciation? A lot of my clients use 1031 and cost segregation until their last days. They’re not concerned about what their basis is because with their heir apparent then there’s a step-up basis and then we start all over with that—whether that’s with their spouse or with their kids or their nieces or nephews or grandchildren. So now I’m already working with the second generation.

David Moore: How’s the acceptance with the second generation versus the first generation?

Jonathan Frizzell: Well, I never lose sight where my relationship started with that family. So I always look at the patriarch and the matriarch first. With other particular industry partners, they want me to address whoever it is the eldest son or daughter, and I never lose sight of the matriarch or patriarch. I’m very old-fashioned that way, and I find that the second generation appreciates that. But as I said, a lot of my clients 1031 and cost segregate all their properties right to the end, and then of course you have that nice step-up in basis. So, you have a duality of deferment. You’re deferring the game but you’re also deferring the recapture too. 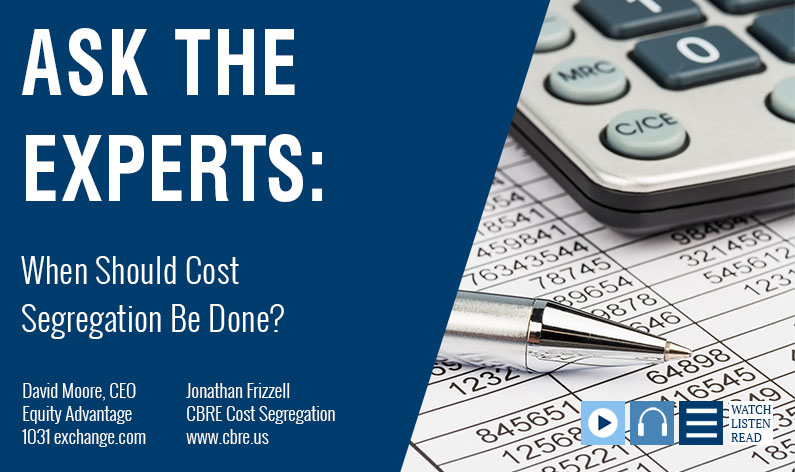 David Moore: So, Jonathan was there anything that impacted cost seg in tax reform?

Jonathan Frizzell: Great question, yes. We have the Tax Reform Act. I never thought this would happen, but Congress has legislated any acquisitions, including used property, after September 27, 2017, are subject to 100 percent bonus. Bonus is defined as anything 20 years or less, 20 years of depreciable life or less, so that would include the 5 and possibly the 7 year on the personal side that we get and then the 15 year on the land improvements. So if you’re an active real estate investor, you may very well be qualified for 100 percent bonus, and you get the benefit all in the first year as opposed to the first 5 years—which is huge. The good news is, of course, that even if the LLC can’t chew up those losses, they travel very nicely right to your personal returns.

David Moore: If we look at what you said, we talked about 1031 loss, the ability to do 1031s on personal property, and a lot of what’s happening now is really a result of taking the bonus depreciation, fully expensing an acquisition to offset the gain realized on disposition. If we’re talking the personal property world.

Jonathan Frizzell: Yes, and it’s my understanding now 1245 is recognized, personal property is recognized, and I would like to say quietly that becomes the point because on the replacement property you still got bonus, 100 percent bonus opportunities. In the year and a half since this change that came with the Tax Reform Act, there seems to be a high level of activity in trading going on. So, I don’t think it’s going to be a problem if 1245 is recognized now and 1031 exchanges.

David Moore: We haven’t really talked about this but I’m going to ask you as far as the cost of something like this if you’re doing a rental. Before businesses like yours existed, you had to pay somebody that had this secret knowledge a lot of money to get a study done in your case, or 1031 exchanges for example. If we go back in the 1980s and even early 1990s, we made twice what we made today on just a set-up fee. But it’s changed with all that’s happened but 1031 was looked at in tax reform as something for the wealthy; yet it’s anything but that. It’s something that anybody can do.

David Moore: An exchange of one to one and a basic transactions is a grand today. That’s nothing. So it isn’t something just for the wealthy; it’s something for the everyday Joe to use. What is the ballpark cost of getting a study done? And how long would it take if somebody just had a rental house, for example? I asked this because rent control was recently passed and people are going to be pinched and looking for more ways to make more money on these properties.

Jonathan Frizzell: There tends to be a range depending on the product type, but usually $5,000 to $10,000. Sometimes it can be lower for a colleague, but that is the general range.

Jonathan Frizzell: One thing about part of my success as well as CBRE’s is that we try to focus on scope instead of actual estimated tax savings, tax savings dollars. The IRS frowns on that even though the big four do it all the time. But the truth of the matter is if you have a 50,000 square foot warehouse with nothing inside, that might be a little easier than a 10,000 square foot full service dental office. But one’s probably going to be about the same amount of money as the other because there’s one-fifth the square footage. So, about $5,000 to $10,000. For single families we have a program that we can perform to up to $500,000 cost basis, where I can get this done for $400–$500. Molly and I did that for one of our esteemed long-time families here in Portland for his gas station, believe it or not. And it’s a modeling program we can actually do and now it’s not a full-blown cost segregation study but—

Jonathan Frizzell: It’s very cost seg light, but we will defend it. That’s another beautiful thing about CBRE: I negotiated with my managing director about the possibilities of what kind of scope we can have for my book of business and they’re happy to do it. All of our studies, regardless of product type, have beautiful comprehensive expanded detail. I break it down into hundreds of pieces, from the 1245, the personal side, and the 1250, and land improvements. You’ll have an executive summary, the breaking down of the buckets. But the good news is that I’m going to break it down to assemblies and subassemblies so when they do improve their property going forward, they’re going to find out what that unit of property or that component costs at the genesis, the time of service, time of acquisition. And guess what? Let’s get it off the books.

Jonathan Frizzell: So there’s an additional value for working with me at the Cost Seg Group of CBRE. I would to say quietly that not all cost seg providers are created equal. You want a real cost seg provider that has a true engineering group. We’re not regulated by anybody until there’s review so you want to have a quality product out there.

The sooner you involve the team of professionals at Equity Advantage in your 1031 exchange, the better. They’re seasoned experts who know all the ins and outs of this complicated transaction. Call them at 503-635-1031 and protect your investments!