Advanced 1031 Exchanges: What is an Exchange?

David Moore speaks on 1031 exchange properties, and what constitutes an exchange. Learn it all right from the 1031 exchange expert himself!

What is an Exchange? 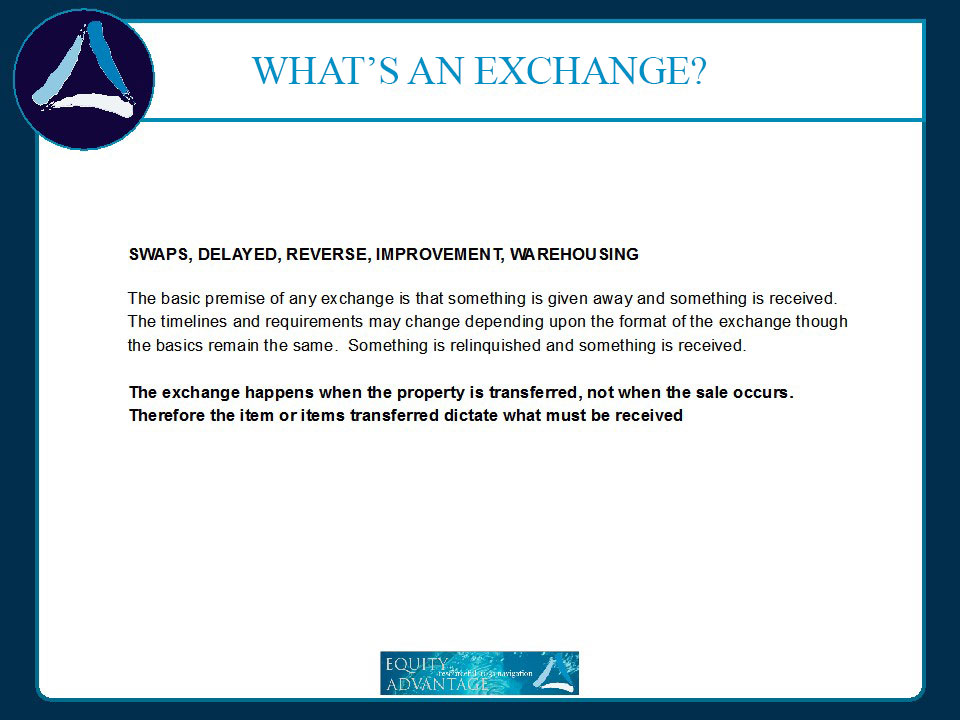 How the transaction works is you list the property, you sell the property, and the state’s forms include cooperation provision in them. This provision says that you have the right or the option to do an exchange. But that doesn’t put anyone on notice. It’s there, which is great because you don’t have to think about it, and if you didn’t think about it, at the last second you can still do it, but what happens if escrow doesn’t know? Right now we have a reverse exchange transaction that the escrow officer tried to get closed. But he had the seller sign two days ago and he didn’t know it was an exchange, so we got the call yesterday to get the deal together. However we need lots of different things with a reverse exchange, including putting a limited liability company together so it is a complicated process.

Settlement statements were drawn, the seller signed them but the buyer had not because the buyer is our client. And the broker didn’t get them involved with us early enough, so now we have to go back and get the paperwork from escrow. Which means escrow has to to redraw all the documents, and all the settlement statements. Now the seller is also going to have to come back in and sign again. So they are probably not real happy about it, and yesterday we had to clamor to get names for the limited liability company from our client. When doing deals like this, it takes time.

So, when do you want to think about the exchange?

When you list or when you start looking to buy. Not at escrow. Now for transactions, if we had known even a week ahead of time it would have been much smoother. Even just the purchase sale agreement, if it had stated that this is a reverse exchange, then escrow would have known. Escrow would have reached out to us because they would have known, but as it was, nobody knew.

Oregon’s state form says the buyer or seller has the right or the option to do an exchange. But my advice is to put something else in there just to make sure everybody knows. The other reason to put something in there is if it’s on the buyers side, the purchase sale agreement in and of itself constitutes a suitable identification if it includes a 1031 cooperation provision. If it does not, then it does not.