Misconceptions about Tenancy in Common

David Moore with Equity Advantage asks the expert attorney Connie Rathbone with Dunn Carney about tenancy in common (TIC). They break down the misconceptions about TIC and discuss the importance of working with good people. Get advice from the experts to maximize your investment options.

Breaking Down the Misconceptions of a TIC Deal

David Moore: Tenancy in common (TICs) got a bit of a black eye through the crash, but you did a lot of work cleaning up a lot of that situation during the crash. I’d be interested to hear about that.

Connie Rathbone: Before the crash, we did a lot of work for tenant in common sponsors putting together transactions, and we worked for the sponsors that did good reasonable deals where they would get 200 or 300,000 as a fee on the front end as opposed to some of the tenant in common group sponsors that I worked for after the crash in which sponsors were making between a million and 10 million on the flips. In those deals, the clients were buried from day one, and they were never going to come out. And then, when the market declines, they’re buried even more.

David Moore: So they were buying into the top of the market and then marking it up?

I started working with a lot of TIC groups and at one point we worked things out in one of the ugliest situations I’ve ever experienced in my practice of law. As a result of the publicity of all of that, probably over a 10-year period, from 2007 to 2017, I represented about 150 tenant in common groups with 35 owners each.

David Moore: Yes, and we did a lot of work together, and you would be working with the lenders and trying to work these things out a lot of times and, and all of sudden, boom, at the 11th hour, something would happen. Sometimes people had a situation where the debt exceeded the basis, which is what’s called phantom gain, and these people would lose the property and then have a bad tax result.

David Moore: Yes, and at the 11th hour we’d jump into these transactions working with you on these and, all of a sudden, we’d be forced into doing a dozen or 20 different transactions in a day, creating different special entities, limited liability companies for the clients, assigning membership interest and everything pre-foreclosure, and it was just a race. Like you, I really felt for these people going through these things, but at least you were doing something to help them—doing whatever could be done to isolate them from the tax obligation in those situations.

Connie Rathbone: For the owners that came in with clean money, their basis was high enough, typically, to prevent a bad tax problem. But in a foreclosure, the IRS deems or pretends that it is a sale of the property at the loan balance. And because many of these people had done a series of 1031 exchanges, they maybe came to the property with a zero basis, zero carry over basis.

David Moore: If they’re deemed sale price is, let’s say $10 million and they own 10 percent, and if they have a zero basis, that means they have a $1 million gain that they have to pay tax on. So not only have they lost everything in the foreclosure, now they have a tax situation. What you’re talking about, and it’s something that you taught me in this entire process, is that these people can exchange out of a 1031 exchange, or can exchange out of a foreclosure just like they can exchange out of a sale. The way that works is you create entities, they transfer their property into it and then you guys handle that as an accommodate or just like you would a sale, which saved them that unexpected tax on the gain, the paper gain that resulted from the foreclosure.

Connie Rathbone: The way they had to do that was they had to add some cash to the exchange. Just like if somebody was doing an exchange out of a sale, it was not uncommon to have to add cash in order to meet the full purchase price. That was what was happening here. Only here, the cash that they added was often not more than they would’ve had to pay to the government for their taxes on their gain.

David Moore: The bottom line is that there are deal makers and deal breakers. I think more than anything, if you’ve got investment real estate, you’d better have some good tax counsel. Somebody who’s going to help you out—and call them before April 15th.

The old TIC rule got sort of beat up in this situation, but it was not the TIC structure, it was the sponsors. Just work with good people. Things happen. As they say about history: Those who don’t study it are condemned to repeat it. So as you move ahead, whatever type of passive investment you buy, you want to be working with people who have been through these things. 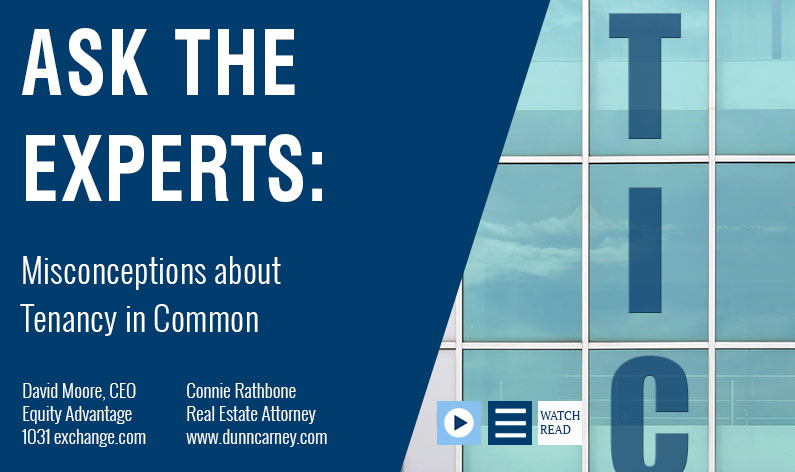 Exercise Due Diligence for TIC Deals

Connie Rathbone: Exactly. The tenant in common structure itself is not flawed. It is the people that you are in partnership with, effectively, that need to be good, honorable people. It is important to consider before you sign any documents that you’re going to be bound by.

David Moore: Typically, when we’re looking at fractional ownership, passive things, we’re looking at Delaware Statutory Trust (DST) entities. But there are sponsors that still use the TIC prop, that structure in value-add situations. We have some great TIC sponsors here in town, so just be aware they are out there. And if you hear someone say, “Oh, it’s a TIC. It’s bad,” then you will know that is not the case; what matters is the sponsor.

Connie Rathbone: My advice for going into a TIC deal today is to engage in a lot of due diligence on the sponsor, of course, because they’re the person and the manager. They’re the person that’s going to be handling your asset. But a big problem that I’ve seen tenant in common owners miss when they are signing up for this is they’re buying a piece of real property and they neglect to do their due diligence on that piece of real property. They buy this as a coupon clipper, thinking somebody else is going to make them a bunch of money. But you should never buy a real estate asset without doing real estate due diligence. And then if you’re going to buy a TIC property, I would prefer to know who the people are that I’m going to be in business with, because although this is not a partnership and we do everything in our power to keep it from being characterized as a partnership, you may at some point have to work with them like you are partners. It’s important to know that you can work with them.

In short, the structure of TIC is not flawed, but how we went into it and operated it in the past was flawed. For that reason, I recommend doing more due diligence on the front end and making sure you can work with the people that you are going into business with.

When you are thinking of doing a 1031 exchange, the sooner you consult the professionals at Equity Advantage, the better. Give David Moore and his team of experts a call today: 503-635-1031.