David Moore and Bob Nelson share their wisdom on the 1031 exchange ID period—one of the most critical parts of the entire transaction.

David: Hello again, David Moore of Equity Advantage with Bob Nelson of Pacwest Real Estate, and once again if you’ve been with us you’ve heard my introductions, but Bob is an old friend. Been doing business together since roughly 1990. Had a lot of fun. Done a lot of deals.

Hopefully we’ve done okay for our clients, and one of the things that we talked about early on is if you go back pre 1991, with unlimited ID’s, buyer’s are liars, I remember rifling through the old RLMS books and people would be concerned about whether they should put something in about a 1031 provision because they felt that people didn’t know what it is and maybe they were afraid of it and that whole segment…

Bob: Or take advantage of it.

David: …Exactly, so that whole sentiment has gone away, but if we look at it in today’s world, you have a situation where I would argue that a 1031 buyer is actually a more solid buyer in a lot of cases than somebody walking off the street because they have timed events that have to happen. If they don’t get it done…

Bob: And they know the consequence of not getting it done.

We’ve got a presentation today at CCIM about tax reform, and they had a great CPA come in, Dale Glassor from Isler Northwest who spoke. He Talked about the bottom line, which is that unfortunately not enough people have good tax counsel. And you want to take advantage of these resources. What I want to say is, Bob you moderate those, the marketing sessions at CCIM.

Now you have 100 and some odd people sitting in the room, with brokers that say, “Hmm, this is a great. I know this…”

David: What comments do you have along those lines as far as controlling deals? We’ve talked about this before, but how do you make sure that things are there and people understand that this 1031 buyer isn’t a spot? As a broker how do you represent whether you’re a listing broker or a buyers broker…

David: What do you do to make sure you are taking care of your client?

If every thing has been done properly in advance, we will be very, very close to being able to close the transaction and that perfects the exchange. If we can close it within the 45 day period, nothing can go wrong.

David: So if you’re a buyers broker, obviously you’re not going to let the sellers broker know what’s been ID’d. Or where you are on the 45th and 180 days. 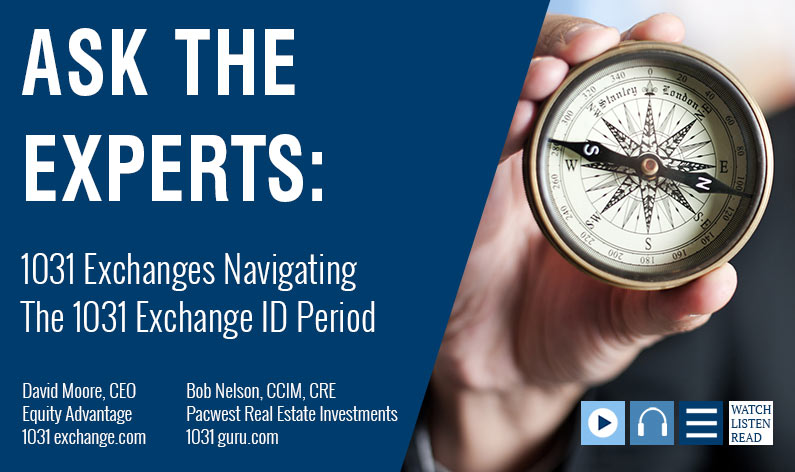 David: On the other hand if you’re the listing broker and you’ve got a buyer coming in, you’re going to do everything you can to find out what’s been ID’d and where they are with that stuff, and the bottom line is people will tell you some prices go up beyond where they should because of the 1031 exchange.

David: The bottom line is if somebody is looking at a half a million dollar tax consequence of a failed exchange, or paying an extra $20,000 to fix something, what are they going to do?

Bob: Yeah, they’ve lost a lot of their leverage capacity because of the time frame and the constraints of the exchange and they know if they fail, they pay the tax. And there should be a law against paying the tax. It’s a very serious situation, and as long as it works properly it’s never enough time and I assure you if you’re my client and we’ve gone through this process you will say things to me like, “You’re asking for me to make offers and I haven’t seen it all.”

That’s right. I’ve given you a two week period of time plus whatever additional time that we had prior to the time that you sold the property that you’re going to be exchanging forward end of the transaction, so if I can meet with you well in advance of the time we sell, the relinquished property or as I refer to it the down leg property that adds more time and more comfort and you will feel more comfortable that you have seen enough that it works, but I go through a lot of counseling sessions. Three of them particularly to allow me to re-hone in what you are after.

Now I don’t think in terms of a property with a blue roof and red bricks. I think in terms of investment benefits. There’s cashflow. There’s tax shelter. If we are dealing with a mortgaged property, there’s principle reduction. The fact that the tenant in an income property will be making 12 rent payments, which will reduce the loan.

David: I think Bob’s going into the next segment here.

David: Yeah, I think he is bleeding into the next segment in investment strategies.

David: No, no worries. See it’s all good stuff. We just want to keep talking, right?

David: So I think that the bottom line is you’re going to control the transaction.

Bob: If you don’t control the transaction then you’re heading for a train wreck. I’ll assure you, there’s no such thing as luck when it comes to exchanging.

David: And we can buy the replacement the same day that the relinquished property goes away, if it’s setup right. So if you got things right, we can wire funds straight from one closing to the next. Once in a while in certain regions of the country we have closings that aren’t done by professional escrow companies and sometimes goes into a holding account…

Yeah, so then we can’t do things or if were going East to West maybe we’ve got time issues, or not East to West, West to East. We’ve got issues there getting things done the same day.

David: But it’s a time deal.

David: So let’s pick back up with a conversation next time on the strategies you were talking about, and thank you very much for once again joining us and we look forward to having you back. Thank you.

David and Bob have many jokes about them, but 1031 exchanges are serious business and you need an expert in your corner. Give David and his team a call today. Click below for other episodes:

David Moore And Bob Nelson On Finding a 1031 Replacement Property