4 Basic Cornerstone Rules of the 1031 Exchange

To make the most of their opportunities, investors should understand their options for tax savings with a 1031 exchange. David Moore of Equity Advantage examines the four basic rules that form the underpinning of a 1031 exchange. Understand the rules so you can plan appropriately and avoid trouble.

when I look at an exchange, I like to keep it simple, stupid. They whole kiss principle works well for people, so I always look at it from four basic directions:

1. It must be an exchange.
2. What is received must be of like kind.
3. You must satisfy what we call the napkin test.
4. We have to have continuity investing.

When I look at a retirement account, I break it into two primary issues. First, what is a person going to buy and who are they transacting between or for the benefit of? When we look at this first principle, it’s got to be an exchange. The exchange is between the taxpayer and the exchange company, it’s not between the taxpayer and the buyer or seller of the property that’s being relinquished or the replacement property. And I think that’s one of those things that people often don’t understand. So as far as anyone’s concerned, typically in a delayed exchange format, we’re going to have somebody sell a property, buy a property, and we’re stepping in the middle of it and turning it into an exchange by the use of our assignment agreement, which allows us to take care of everything. The bottom line is that something is being given away and something is received.

What’s given and received have to be of like kind. Now tax reform took away all the personal property, so now we’re just dealing with real property. If we look at the right kind definition and apply it to real property, it’s a very broad definition. It refers to the nature of the investment rather than the form. So any real property held for investment is going to be like kind with any real property acquired with the intent to hold for investment. Now keep in mind this issue: how do you prove intent or what would be a long enough period? This is a question that comes up all the time—how long does something have to be held to have it considered held for investment? And it does have to do with intent more than time. Many court cases out there substantiate that.

If somebody is pushing me for a timeline, I’d like to see at least a year and that’s based upon two factors. One factor is that it’s been proposed several times, and the second is that the break between short- and long-term tax rates on assets held for investment. I think you can defend that. Is a year necessary? My advice is to talk to your tax people. Ultimately it’s up to you and your tax people how long is long enough. Often people will talk about a two-year hold because they say it says two years in the code. But it’s two years if a related party transaction occurred, but if it’s an arms-length transaction, then that’s not going to apply. With different tax years, a lot of tax practitioners are going to say that would be long enough, so you can go from a rental house into apartments, apartments and office buildings and the land, even a place at the beach to retire into at some point would be something that would fit just fine.

That third rule, which is the napkin test, says to go across or up in value in equity between the relinquished and the replacement property. The napkin test was actually started by a gentleman named Marvin Starr, Miller Starr Regalia, out of the Bay area, and it’s called the napkin test because he scribbled it out on napkin during a seminar. You’re going to hear a lot of people say you have to replace debt in an exchange. Totally untrue.

Debt can go away two ways. One is by going down in value, which triggers tax because you went down in value. The other way debt goes away is by adding cash. If you remember what happened to loans a few years ago during the crash, the loan to value decreased and people’s equity decreased all at the same time. So a lot of times they had to add cash to the transaction and a lot of times people come and say, “Well hey, I don’t want any debt on the replacement property, so do I have to pay off the relinquished property predisposition?” You don’t have to do that. 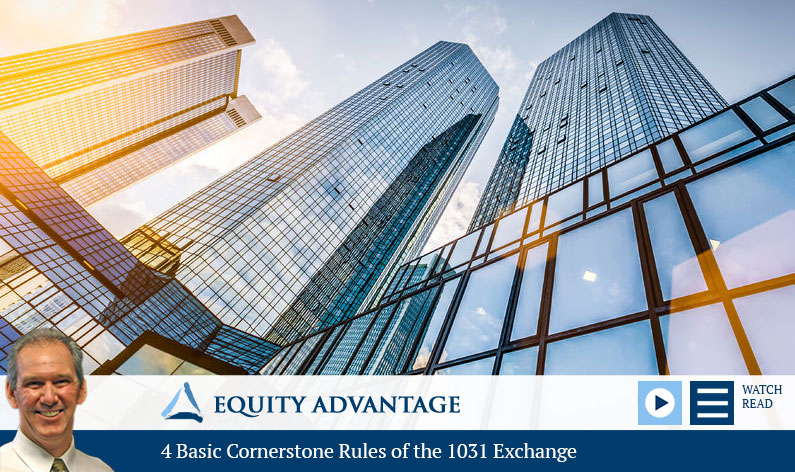 There has to be value and equity across or up for total deferral. Keep in mind that 1031 is not all or nothing, so if you want to pull some money out, you can pull it out, but you’re going to pay tax on that money as boot received. Boots, anything that’s received in an exchange, does not have like kind and the thing you’ve got to be aware that as soon as the boot received exceeds the total amount of gain, you’ve defeated any benefit of an exchange. So pieces of boot, fine, don’t have that boot exceed the total gain because then you’ve nullified any benefit of the transaction.

Finally, that fourth cornerstone is continuity investing. Anybody that’s been in an exchange will tell you time is the biggest problem, which it is. You’ve only got 45 days from that relinquished property’s closing to identify what’s to be acquired, and 180 days to get it done. This is always a headache.

We’ve got to put it together for that limited liability company, and a husband and wife going forward out of a property in an LLC into a new property personally and a non-community property state can be a problem. It’s going to be more expensive. So a lot of times the lenders won’t allow it to be financed in the LLCs name. So the taxpayer ends up frustrated because the cost of money might get to be more. But these are all examples. Even though those four basic simple points, I think you’ve got to apply them any time you think about moving a property, but the biggest thing I’ve got to leave you with today is plan ahead.

Don’t leave an exchange until the last second. Consult a professional about the exchange you think you might want to do well before the deal ever gets to escrow. A lot of people call us the day after closing, and that is too late. So apply those four basic cornerstones anytime you look at a transaction. Reach out before you ever put a property on the market. Justify what you’re doing. Sometimes people put their life on hold to defer that gain, but you’ve got to really look at the whole big picture.

Navigating 1031 exchange options takes a professional, and you can count on the whole team at Equity Advantage to help. Your investments are just too important not to have an expert on you team. Give the folks at Equity Advantage a call, 503-635-1031, to get started!