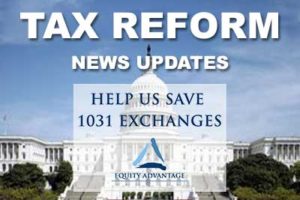 Just out, the revised November 2015 study shows a net decrease in Federal revenue and a contraction of the GDP by more than $8B.

The study also predicts investments will fall by $7B, and the negative effects will impact a broad range of sectors including real estate, transportation, vehicle/equipment rental and leasing, and construction.

Download a PDF of the study, “Economic Impact of Repealing Like-Kind Exchange Rules.”

Make sure your elected representatives know how you feel about repeal of IRC §1031.

On very short notice, Mary Foster and Suzanne Goldstein Baker testified before the State of Washington, House Business and Financial Services Committee at an important hearing on Friday, November 20th in Olympia, Washington.

The issue before the committee was proposed language creating a “fiduciary relationship” between QIs and their clients. Foster and Goldstein Baker spoke of negative unintended consequences that would ensue from broadening the statute to describe qualified intermediaries as fiduciaries, from tax law, fiduciary law and practical perspectives.

Their work illustrates how important advocacy is a every level, not just federally. Watch a video of the hearing.

The importance of an effective lobby on behalf of §1031 exchanges can’t be understated. Here’s your chance to demonstrate your support of the FEA PAC in their sponsorship of event with influential members of Congress.

A two-year tax extender bill has been filed in the House. Williams and Jensen, FEA lobbying partner, and the FEA will continue to monitor as more develops.

David Franasiak of Williams and Jensen, attended a three-day fundraiser the week of November 20th and spoke with Rep. Bill Shuster (R-PA), and Rep. Bob Dold (R-IL), earning an important statement from Rep. Dold that “1031s are important.”

The GAC forwarded a pro-1031 article to Grover Norquist, of Americans for Tax Reform, who tweeted the Banker and Tradesman article by tax law Professor Joseph Darby III, “Eating the Seed Corn” It was seen by an estimated 81,000 Twitter followers. Read the article here.

For more information and ways you can make your voice heard regarding 1031 exchanges visit: