With years of 1031 exchange experience between them, David Moore and Bob Nelson are firm believers in careful planning of your 1031 transaction.

David Moore: All right, David Moore and Bob Nelson here once again. Earlier we talked about planning deals and successfully completing transactions. In today’s marketplace, it’s tight, and you better be set to go. If you don’t have things locked up they’re going to go away. Sometimes they go away anyway.

David Moore: If we look at the ID rules, and you’ve been doing this long enough Bob, you’ve got an early CI number. But you think about pre-1991, and people could identify virtually anything they wanted. You want to identify a county, fine, do it.

David Moore: You hear the saying, ‘buyers are liars’ and I think that sort of evolved out of that process. Yeah, I want your property. Yeah, I’m going to tie it up. Well, you better know where you are. In ’91, we had a lot of tightening of 1031s, formalization of it and they gave us some ID rules. Three different identification options that are there today, and you only have to meet one of them. You don’t have to meet all three.

David Moore: But if we look at the three different rules, you have the three property rule, the 200% rule, and the 95% rule. What do most of your clients work with? What do you typically see or what do you like to work with? I know you’re probably not a fan of the 95% rule.

David Moore: It might put a little pressure on you.

Bob Nelson: It puts a lot of pressure on you because you can identify as many things as you’d like of any value, without a value limitation, but you have to buy 95% of that which you’ve identified. Well, what happens when on one of the properties, the guy leaves and goes to Europe for six months and can’t be found… guess what? You’ve just blown that one wide open. To violate those rules is to cause the transaction to be fully taxable, so you can’t afford to have that happen. It’s an interesting process.

In advance of the time that we potentially even offer the down leg property, the property that I’m going to be going out of on the exchange. Which I refer to as the down leg, before we offer that for sale we need to come up with a game plan of how it’s going to work, and what we’re after. Are we after a number of different properties, smaller properties that we might be exchanging our one property into, or are we after one that’s even larger than what we have? And we’re given an opportunity then to identify as many as three properties.

It may be advantageous for them to have a series of things free and clear, with all the debts stacked against one or two things. But it depends on the transaction. It’s really a function of where they’re trying to go.

David Moore: I sort of encourage people. One example of a transaction that we did years ago, was somebody gave up a single asset, and bought 24 replacement properties. Well, the client was a CPA and she knew the cost of a single sale fail. If you don’t close 95% of the aggregate value of all properties you’re going to lose the exchange. With her background, she knew to get it done inside of 45 days, so she did it.

David Moore: But, with that said, you made an important point. A lot of times if we’ve got somebody coming in and they’ve got no debt, a whole other conversation we can talk about it in another video, the napkin test, value equity across or up. You’re going to hear a lot of people say, well, you’ve got to replace debt. That’s not entirely true. Debt can go away two ways.

You can go down in value, which triggers taxes you went down in value. The other way debt goes away is by adding cash.

David Moore: When we had the recession, we had lots of people adding cash. The loan to value was decreased, the banks just weren’t making those loans, and you remember, I’m sure you had lots of transactions where people were saying, gee, do I need to pay the property off prior to the disposition because I don’t want any debt on the replacement? That’s really an irrelevant conversation. You can always add money, so the debt itself is not a problem. What we’re concerned about is value and equity.

Bob Nelson: These are things that you need to know about well in advance of the time that you offer your property for sale. Frequently that sale results as an unidentified buyer walking through the door, making an offer to you on your property that you had never intended to sell, and all of a sudden it’s an offer you simply can’t refuse.

Then you slam into gear trying to do a tax deferred exchange and guess what?

Maybe that’s a cash buyer and he wants to close next Friday. We have no opportunity to pre-plan that transaction, so it’s kind of a hit and miss situation and it’s a horrible transaction to try to engineer. I consider myself to be an exchange engineer, and if there’s a way of doing it where we have to buy several properties, I’m going to potentially go after the largest one first to eliminate the majority of the tax consequence. If I can’t buy other properties, at least I’ve deferred the majority of the tax consequence in buying the very first one.

David Moore: What if somebody came to you Bob and said, “Look, I’m giving up this property. I’ve got no debt on it, but I want to lever into several different replacement properties.”

David Moore: Let’s say one of them would satisfy the exchange. Wouldn’t a great solution be just to buy the one via the exchange and then do a cash out refi and lever in the balance of the properties in a period of time where you don’t have time constraints, and another benefit of that strategy would be that the purchase price of those other properties is now your basis. You’re not deferring gains into those things.

Bob Nelson: That’s right, you have a full stepped up basis because you’ve acquired the thing, say as a purchase. At the same time, if it has to roll as an exchange, and when a client has been pre-approved by a lender to a certain amount of debt capacity, that has to do with their global financial position. It has nothing to do with the property. They have the capacity to service debt if negative cash flow were to occur.

So, they’ll be looking at this person with more favor. If I can go after the largest one that satisfies the exchange, and have the lenders standing by with a certain amount of debt, I simply can either apply as much as is required to buy the property with this much debt opportunity left over. What happens? I get to satisfy the exchange with the very first property, but with more purchasing capacity and borrowing capacity. Now I can go after a second or a third property and it makes it a rather interesting process. 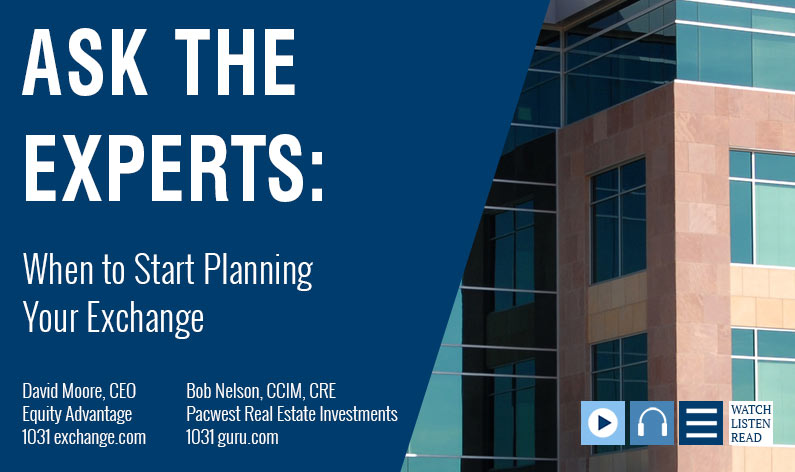 David Moore: So let me ask you this real quick. If you’re working with the 200% rule or the 95% rule, we’re talking about values. What if the property’s not on the market. What do you tell people? What are they worth? You know, I joke with brokers all the time, I say, “Well, of course you have to have a broker to sell a property or list property.”

You know, if I go back to the audit manual that we had in roughly 1990, late 80s talking about 1031s, one of the questions was “Was the property on the market at the time of identification?” Which is irrelevant.

David Moore: It means nothing. The property doesn’t have to be on the market. So how often does somebody say, “Hey, I want this thing and it’s not on the market?” How often?

Bob Nelson: On top of that, let’s take it one notch further, let’s say that you’re going after four or five or six properties, which is allowed by the 200% rule, and you’ve marked down on a piece of paper that property A is worth this, B, C and so forth, you add them up and it is below the 200% of your sale price, so restated, that qualifies.

What happens then if you’ve marked down, this property is a half a million dollars, but in final negotiation you had to pay $600,000 for it, what’s just happened? You’ve gone over the top. What happens if you violate that rule? That is an unforgiving rule.

It takes a lot of still and negotiation up front to make sure that you’re within the capacity of qualifying for the exchange, if anything goes wrong, you may have a bombshell that all your good work as a broker goes right down the drain and of course, the client’s not pleased with your name from that point forward because they’ve just incurred tax.

There’s nothing quite like expert advice. And when it comes to 1031 exchanges, that’s what you’ll get from David and the whole team at Equity Advantage. Call today! Click below to view our other episodes:

David Moore And Bob Nelson On Finding a 1031 Replacement Property